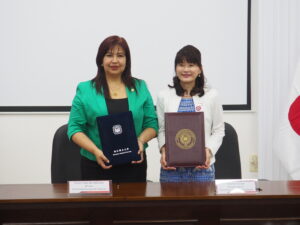 The first part of the international symposium consisted of greetings from the authority as well as presenting the academics, and the second part was the presentation of reports by students and the exchange program. The language of the presentation was entirely in Spanish.

The purpose of the international symposium was explained by: Dr. Yoko Fujikake, Advisor to the President of Yokohama National University and professor of the Institute of Urban Innovation.

The 1st presentation was headed by Professor Carlos Peris of Asuncion National University with the theme: “International cooperation as a factor of gender empowerment”

The 2nd presentation was headed by Professor Néstor Molinas of Asuncion National University with the theme: “Without borders: Neither rural nor urban” “There are no boundaries between rural and urban areas (this presentation also included a demonstration with professor and students ) ”

The 3rd presentation was headed by Dr. Yoko Fujikake, professor with Yokohama National University with the theme: “Empowerment of Women and Their Challenges

4th presentation was headed by  Carlos Hernán Avalos Valdez of the Graduate School of Urban Innovation, Yokohama National University, 2nd year of master’s course with the theme: “Men as Indirect Beneficiaries and Their Behavior Towards Women: Case Study of the Improving Living Conditions for Rural Women in Paraguay Project”.

In the first report, Professor Carlos Peris presented international cooperation in the field of gender empowerment, and in the second report, Professor Néstor Molinas expounded on development in rural areas. He also reported on workshops with students on how difficult it is to value rural areas and to understand that these areas have their own ideas of “intelligence” and how one must understand the need to accept that rural areas have their own knowledge which must be considered in order to understand the reality of rural areas. Dr. Prof. Yoko Fujikake, from a case study of the project of improving living conditions of rural women in Paraguay, explained that the empowerment of women is important and how the problems involved are expressed; what efforts are involved in international cooperation; a report using the concept of Good Living; and if and how it is necessary to reconcile the norms of the unique values of rural and modern western gender concepts. An international student of Paraguay in the second year of a Master’s Degree in the Graduate School of Urban Innovation, Carlos Avalos Valdez, presented the colonial history of Paraguay and its relationship with indigenous culture and the Guaraní language, and theories on machismo and its perpetuation in rural areas of Paraguay. 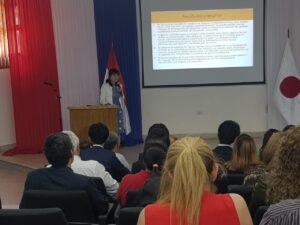 Miyaka Iriyama / Kaya Minagawa of the Department of Urban Societies of the Faculty of Urban Sciences, Yokohama National University, 2nd year, presented the topic: “Dissemination of Ñanduti in Japan (strategies for the diffusion of ñanduti in Japan)

In the second part, the students who participated in this international symposium presented research reports in the Spanish language, the first time that they as undergraduate students reported in Spanish in such a large and important space. As a result of their preparation, many questions and comments were made from the participants, which was very satisfying.

In this way the International Symposium and Student Exchange came to an end. 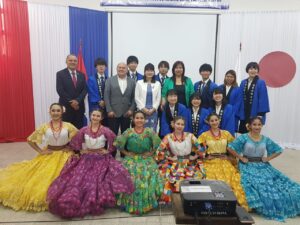