Visit of His Excellency Vice President of the Republic of Paraguay
On October 14, 2019 and on the occasion of the “100 years of the Establishment of Diplomatic Relations between Paraguay and Japan” His Excellency Don Hugo A. Velázquez Moreno, Vice President of the Republic of Paraguay and His Distinguished Wife Mrs. Lourdes Samaniego de Velázquez and the representative of the Embassy of Paraguay in Japan, Mr. Ambassador Raúl Florentín Antola, visited to President Yuichi Hasebe, President of Yokohama National University and Professor Yoko Fujikake.
Yokohama National University has been implementing through the Office of Technical Base Cooperation of the Japan International Cooperation Agency (JICA) since September 2016: the Project of “Improving living conditions of the women in Paraguay” In the Departments of Paraguarí and Caaguazú, through project management by Dr. Yoko Fujikake. In addition, as part of the Global Studies Program, Yokohama National University has sent students to Paraguay since 2013 and has collaborated with Asunción National University, Caaguazú National University, Nihon Gakko University and other institutions. We are working to solve social problems and at the same time, we receive Paraguayan researchers, Nikkei-Paraguayan and Paraguayan international students. We exchange education and research, and we deepen a multifaceted relationship as a bridge between Japan and Paraguay.
Vice President Don Hugo Velázquez, his distinguished wife, Mrs. Lourdes Samaniego de Velázquez and Mr. Ambassador Raúl Florentín with President Yuichi Hasebe and Professor Yoko Fujikake, actively exchanged opinions on the efforts between Paraguay and Yokohama National University and the possibilities for future collaboration. International student and students who had traveled to Paraguay also participated sharing their experiences.
We would like to express our sincere appreciation to Yokohama National University for welcoming His Excellency Vice President of the Republic of Paraguay and the Ambassador of the Republic of Paraguay in Japan Raúl Florentín Antola on this 100th Anniversary of the Establishment of Diplomatic Relations between Japan and Paraguay. We will continue to work hard as a bridge between the research practices of Japan and Paraguay. 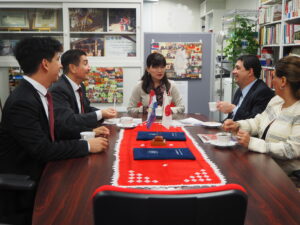 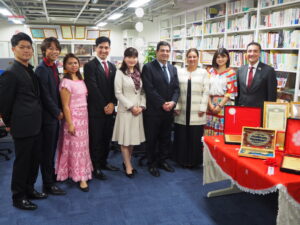